Properties of a good bituminous mix : 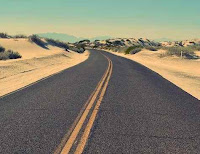 Stability is the resistance of the paving mix to deformation under the load. It is the stress to which specified strain is produced .Depending upon the specification or field condition, it is influenced by density of the mix or percentage voids in the compacted mix or viscosity of bituminous binder. If the voids are less, stability will be more and strength will be more. But there must be minimum voids which would provide space on necessary density which takes place under the traffic movement and expansion of bitumen at high temperature in the atmosphere. If there are no sufficient voids, the bituminous binder bleeds over the surface and causes skidding.

It is the resistance of the mix against weathering and abrasive actions. Due to weathering bituminous mix gets harden which is due to loss of volatiles and oxidation. The tensile strain is develop cracks or plastic failure due to wheel loads and excessive strain
Flexibility
Flexibility measures the level of bending strength of bituminous mix.

It is the ease with which the mix can be laid and compacted to maximum density. It is the function of gradation of aggregates, their shape and texture, bitumen content and its type.
Read more :

Founder & Admin of civilengineeringsolution.com, I am a civil engineer working as a Assistant Engineer (QA/QC).